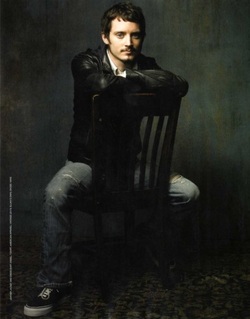 Elijah Jordan Wood was born on January 28, 1981, in Cedar Rapids, Iowa, to Warren and Debbie Wood. He has an older brother Zack and a younger sister Hannah Wood. At an early age Elijah showed a knack for entertaining and wowing audiences, and his mother decided to take him to Los Angeles for an Annual International Modeling and Talent Association convention. He quickly landed himself an acting job. Soon he began popping up in commercials and then in small parts on television, but he got his first major part appearing in Avalon (1990) in 1990. His acting career took off from there, and he began appearing in films such as Paradise (1991), Radio Flyer (1992) and Forever Young (1992), with Mel Gibson. After The Good Son (1993) with Macaulay Culkin, Elijah appeared in North (1994). Although the film was deemed a flop at the box office, Elijah was praised as the only good thing to come out of it. In 1996 Elijah starred in a movie remake of an old TV show, Flipper (1996), and immediately regained his old strength. He appeared in countless films after that. Many critics wondered if his ability as a child actor to capture an audience was wearing thin, as had many child actors', but Elijah has proved that it has only made him stronger. Deep Impact (1998) and The Faculty (1998) were produced after that, and were quite successful. In 1999 Elijah was in three movies that never made it into wide release: The Bumblebee Flies Anyway (1999) (released on satellite TV), Black and White (1999/I) (released on home video) and Chain of Fools (2000). Elijah next went to work on what has been called the biggest project ever to hit the movies, the "Lord of the Rings" trilogy, based on the books by J.R.R. Tolkien.